Stardew Valley for iPhone and iPad Launches in Canada for $10.99 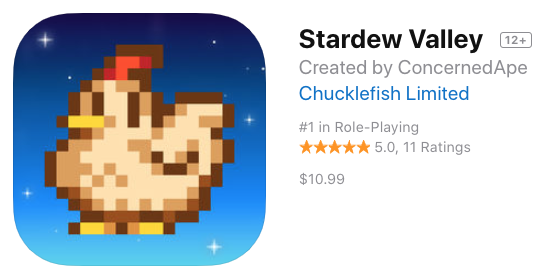 The popular farming RPG is now available for iPhone and iPad from developer ConcernedApe. The game first launched back in early 2016 for Microsoft Windows and since then became a viral hit sensation.

Move to the countryside, and cultivate a new life in this award-winning open-ended farming RPG! Featuring over 50+ hours of content

If you were a fan of Stardew Valley for PC, then this mobile port to iOS should make you feel right at home. The game was first announced earlier this month and contains no in-app purchases.

So far on its first day, Stardew Valley is already the top download in the Role-Playing category in the Canadian App Store.