Stocard launched in Canada last summer, to help digitize your loyalty cards into an app on your iPhone. The app supports various Canadian loyalty cards from business such as Canadian Tire, Esso, Shoppers Drug Mart, Canada Post and more.

The app was updated today to bring Touch ID support, which will enable users to quickly unlock the app via Apple’s fingerprint sensor. Also new is the ability to add the app as a widget to Notification Centre.

What’s New in Version 3.13
With this update we’ve squashed some bugs.

If you haven’t had the chance yet, check out our new widget and optional Touch ID lock of Stocard

The Touch ID settings page also asks for a password as a ‘fallback’ in case Touch ID doesn’t work. The problem here? Your password is shown in plain view as you type it, plus there’s no confirmation prompt to inform you the new password has been accepted, which is confusing. 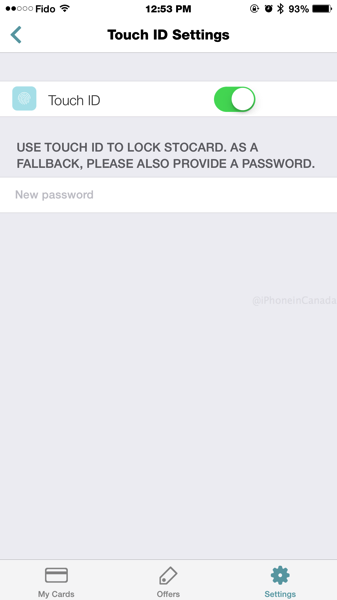 Limitations of Stocard include not being able to use it at self-pay gas station pumps, which don’t have bar code scanners for loyalty cards. So for your gas station loyalty cards, you’ll have to wait for pay stations to update in the future.