Every app developer dreams of this: to get to the top of the App Store charts. You know there isn’t a recipe to achieve that, but there are various ways to do it, and three teenagers (one of them Canadian) have made it: their app, Summarize, went to the top of the Paid Apps chart of the US App Store in 24 hours with almost no press coverage and an advertising budget of $25,000. 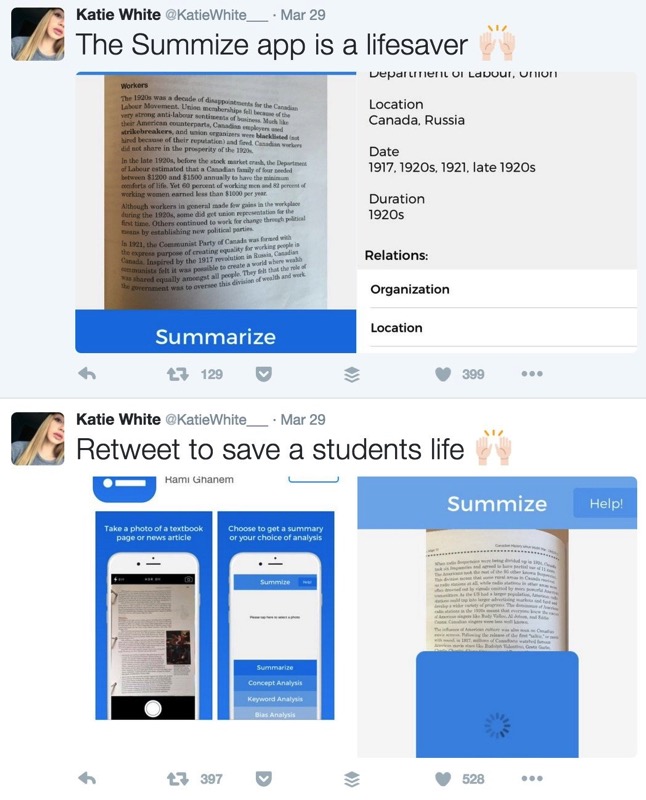 The creative minds behind Summarize, Carter Bjorklund (an 18 year old living in Minnesota) and Aiden Craig (a 16-year-old homeschooler from Canada), told Tech Insider that Rami Ghanem developed the app for them. Carter and Aiden led the marketing, but they focused on social media instead of the press.

Craig met Summize’s 18-year-old developer, Rami Ghanem, at the South by Southwest conference in Austin, Texas in mid March. “He had a lot of textbook pages to read and he wanted to figure out an easy solution to totally solve that problem.” Craig said of Ghanem, who couldn’t be part of a Skype interview because he was in class at the University of Calgary in Canada.

As they explained in the interview, they created fake accounts to promote the app and paid social media influencers to retweet their posts. Their goal was to create material that would go viral on social media and hence trigger app downloads. By the way, the app costs $0.99 and advertises the ability to quickly scan a textbook page or news article and summarize its key points. It sounds like a dream come true for the modern test taker.

“Our focus was to get creative with it and just make as many different types of ads as we could,” he said. “We tried to take the app and incorporate it into funny tweets where the tweets literally would go viral. Some of our posts would get 15, 20,000 likes from pushing with influencers. Ads don’t usually do that type of thing.”

They quietly released Summarize on March 9, but thanks to their social media campaign, the app rose first to hit #80 in the App Store’s paid utilities chart, then jumped to #4, and then to the #4 paid spot overall.

The app’s popularity peaked on March 29, when it reached the #1 paid spot overall. Hitting that spot means – according to data from Tech Insider – roughly $15,000 per day for the developers.

After the interview was posted on Tech Insider, Rami tweeted that they had pulled Summarize from the US App Store to fix some bugs.