If you enjoy watching interesting talks by incredible people, then you’ve probably already visited TED.com. However, with the official TED app, you can watch every TEDTalk on you iPhone or iPad. Recently, the app received its new 2.0 update–let’s take a look again at this popular app.

You won’t have any trouble finding something you want to watch. When you open TED, you’ll immediately see the new TEDTalks, and the popular ones. There’s also a tool called Inspire Me that has you chose a category, such as ingenious or inspiring, then how much time you have (between 5 to 60 minutes), then gives you a TEDTalk(s) to watch that fit your chosen category and time limit. This is a great content discovery tool. 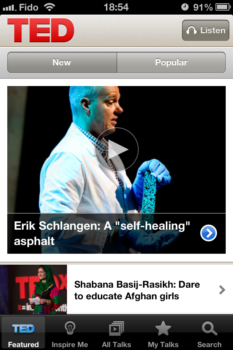 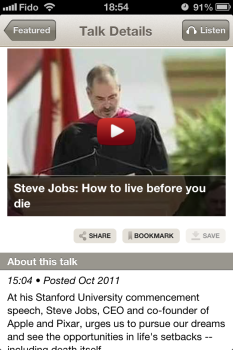 You can also search for specific TEDTalks, or browse by theme, tags, and languages. When you find a TEDTalks you want to watch, but don’t have enough time to watch it, you can download or bookmark it, and find it later in your My Talks page. Also, you don’t have to worry about the spoken language a TEDTalk, because they all have subtitles in over 90 languages (a new feature for version 2.0).

Unfortunately, TED would often crash when I tried to play a video. On one occasion, TED crashed on me 4 times before the video would even open. Then, once open, it wouldn’t stream. I found the only way to correct this cycle was to restart my iPhone. 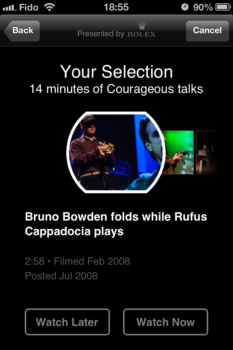 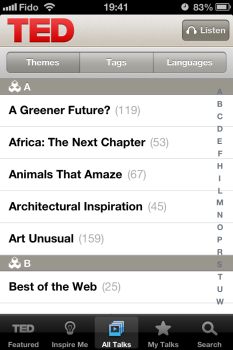 TED is an easy to use app with all the content you’d find on TED.com, and even though it is suffering from some technical issues, you should give it a try if you enjoy TEDTalks. You can download TED for free from the App Store here. Then let us know if you prefer to use the TED app or TED.com.

If you’re really interested in TEDTalks, the TED2014 and TEDActive 2014 conferences are coming to Vancouver and Whistler for the first time March 17-21, 2014. Registration for these events are now open.