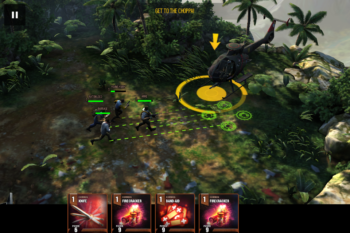 If you love the smell of napalm in the morning and you’re in the mood for an 80s action film inspired adventure, then The Collectables is for you. You’ll be going on missions to eliminate enemies, blow things up, rescue prisoners and then finish by getting to the choppa! 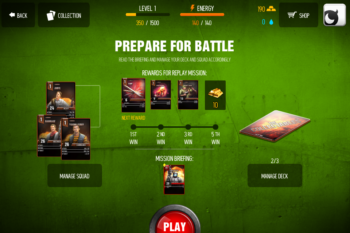 Why is it called The Collectables? Apart from because it rhymes with The Expendables, it’s because you are collecting two types of cards, Hero cards and Action cards. Hero cards are the characters you take on missions. While Action cards are the bonuses, such as health packs or explosives that you can use once per mission. If you’re feeling lucky you can spend gold on card packs and hopeful find that great rare card in the sea of commons.

You can also upgrade both types of cards to make them more powerful or increase the duration of their effects. Unfortunately, as this is a free-to-play game, if you have the need to speed through The Collectables, you’ll have to buy energy or end up waiting as each mission you play drains your energy bar.

I really enjoyed playing The Collectables. Even though all I’m doing is moving characters around the map, watching them shoot enemies and dropping Action cards, it is fun and feels great. Moving characters to hide behind cover was tedious due to the small iPhone screen, but still achievable. My strategy became avoiding cover and keeping my squad moving so they are engaging the least number of enemies at a time and using Action cards to get out of tough situations. This led to some intense and exciting moments that I won’t soon forget. 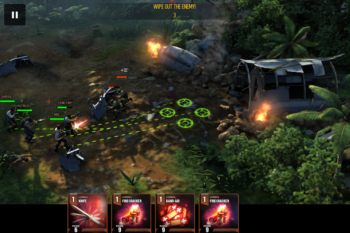 Run and gun to wipe the enemies out

Not only is The Collectables a great game, but a memorable one too that you can download for free from the App Store. So give it a try and then tell us if you saw any familiar action movie moments (Yippee-ki-yay).