Following a busy December, with one million live apps in the App Store, AppsFire — the app discovery company — has taken a look at the best new iOS apps launched last year.

Apple has its own rankings, but as AppsFire points out, some of the editorially selected apps — such as Duolingo — were launched back in 2012. So, to compile the list of the best 25 iOS apps developed in 2013, AppsFire has used the following methodology. Focusing on users, they have picked out the apps based on the App Score: a simple, dynamic quality score that takes into consideration the app’s rating, ranking performance over time, and much more.

The best game title in the Free Games category goes to Despicable Me: Minion Rush, followed by LINE HIDDEN CATCH, Injustice: Gods Among US, Temple Run 2, and LINE Pokopang. 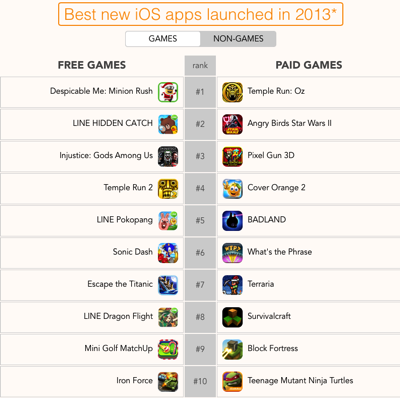 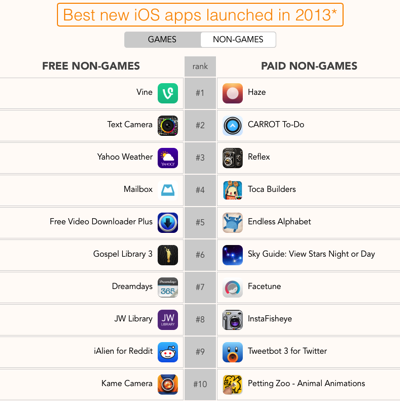 Interestingly, Vine took the crown in the Free Non-Games category, but we can find familiar apps such as Yahoo Weather in the third position, right after Text Camera, Mailbox in the fourth position, and Free Video Downloader Plus in the fifth. The Paid Non-Games category was topped by Haze, followed by CARROT To-Do, Reflex, Toca Builders, and Endless Alphabet.