Back in November, Tim Hortons launched a promo to encourage mobile app downloads and order, where users would get a free coffee with three mobile orders placed.

But it turns out that promo didn’t go exactly as planned for some mobile users, which has resulted in Tim Hortons offering a $5 credit, as it “was not a seamless experience for everyone”, reads an email to customers: 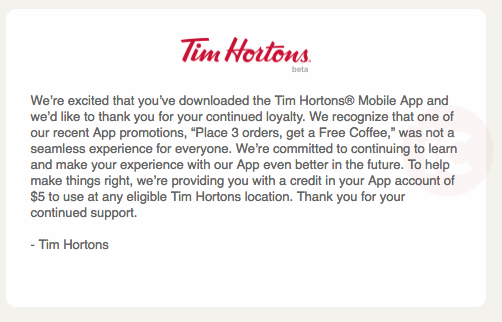 Tim Hortons says the $5 credit to accounts can be used at any eligible location, a move the company says is to “make things right”.

The iconic Canadian coffee chain launched mobile ordering last summer, and recently updated their app to support ‘Scrrroll up to Win’, a weekly digital version of their annual Roll Up the Rim contest.

Did you get a $5 app credit from Tim Hortons?