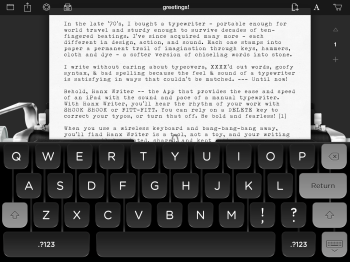 As you may have already read, Tom Hanks, a typewriter aficionado, collaborated with Hitcents to develop Hanx Writer. All three of the typewriters (two of which require an in-app purchase to unlock) available in Hanx Writer have an unique font, look and sound, and were all inspired by typewriters from Tom Hanks’s personal collection.

They’re also a bit more modern than physical typewriters, for example you can delete words (and by words I mean one.letter.at.a.time) and you have all the characters from the standard iOS keyboard available. A few more modern features are available, such as text alignment, when you buy an additional typewriter through an in-app purchase. 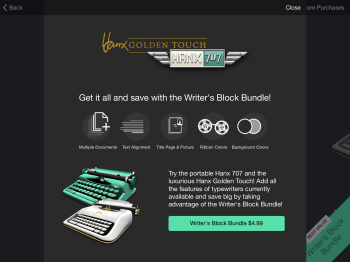 What I like about Hanx Writer is its simplicity. All I can really do is put words on the page and I have about as much control over the format of a document as I do in TextEdit or Notepad. So I couldn’t use Hanx Writer exclusively as I occasionally need to adjust text size or the margins. However, that’s okay, because it’s still functional as an alternative word processor all the while being fun to watch and listen to as I type. 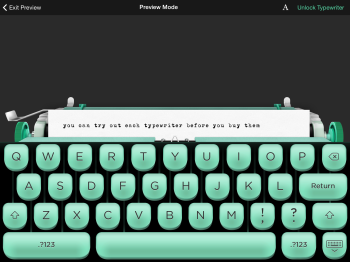 Hanx writer looks and sounds like a typewriter, while being a bit more functional than a physical one and functional enough for occasional use as a word processor. You can download Hank Writer for free from the App Store. Then tells us if you think this is just a nostalgic gimmick and if you would prefer to stick with a modern word processor.