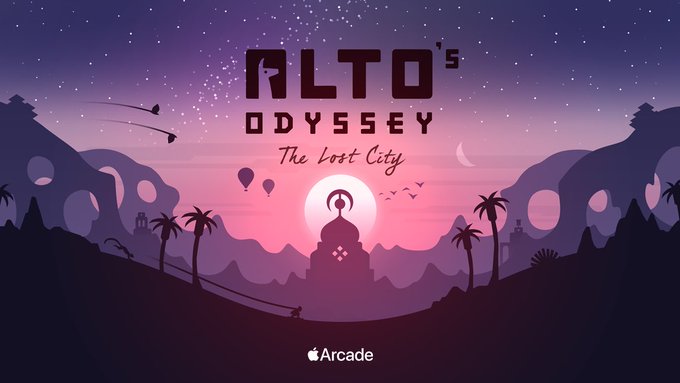 Toronto-based developers Snowman, the creators of the endless runner, Alto’s Odyssey, have launched a new version of the game called The Lost City, now available today on Apple Arcade.

This special edition of Alto’s Odyssey takes place in the desert and will see you attempt to uncover an ancient mystery.

Join Alto and his friends on an endless sandboarding journey to find The Lost City and unearth the secrets hidden within. Soar above windswept dunes, traverse thrilling canyons, explore ancient temples and delve into vast caverns in a fantastical place far from home.

On this journey, you’ll grind across vines, bounce atop hot air balloons, ride towering rock walls, glide in your wingsuit, and escape mischievous lemurs – all while uncovering the desert’s many mysteries.

Explore a new and unique biome with special hidden challenges, layered among the classic Alto’s Odyssey experience long-term fans know and love — only on Apple Arcade.

Snowman started teasing the release of Alto’s Odyssey: The Lost City, back in mid-June. For now, the game is iOS only and there’s no mention of Android support just yet. Given it’s an Apple Arcade exclusive at the moment, it may be a while before the new game expands beyond the App Store.

Alto’s Odyssey launched back in February 2018 and was the sequel to Alto’s Adventure from 2015.

Apple Arcade costs $5.99 CAD per month in Canada and is also bundled as part of Apple One subscriptions.