It’s that time again for the premier major on the PGA Tour–The Masters. TSN has announced once again the TSN Masters app for iPhone and iPad will stream live feeds from Augusta National starting April 8th. This year marks the first time ever TSN and Global will pool resources to produce original highlights both before and post rounds on location. The app was updated three days ago and now supports the Retina display. 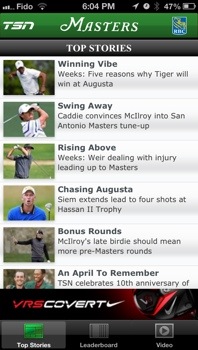 Five streams will be available: