TSN TradeCentre for iOS has received an update today to bring the app up to speed for the fast approaching 2013 NHL trade deadline. TSN is known for their 10-hour flagship broadcast of TRADECENTRE ’13 and you can watch it all live right from within the app, on top of its extensive news coverage.

What’s New in Version 1.5.6
The free TSN TradeCentre app is your definitive destination for comprehensive coverage of one of the biggest days on the NHL calendar – Trade Deadline Day. Highlights of the app include: 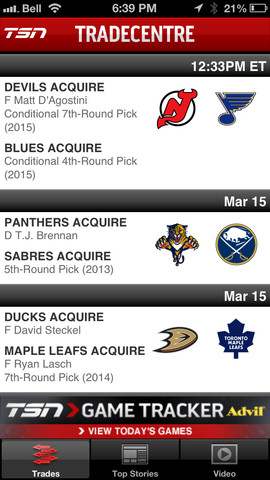 The app supports the iPhone 5 and Retina iOS devices. If you used this app to track last minute trades last year, then this should all sound familiar to you. Iginla got moved from Calgary before the deadline–who’s going to be next?