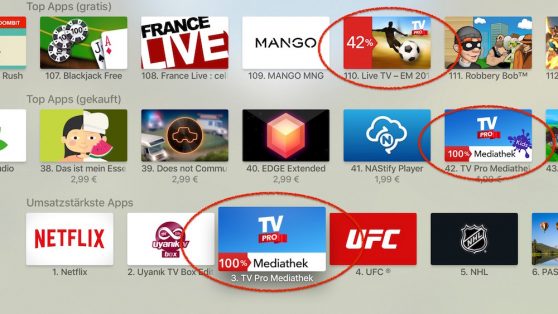 Apple has quietly updated its tvOS Top Charts algorithm, Equinux developers have noticed. The Top Charts includes a list of top paid, top free, and top grossing apps in the Apple TV App Store (via 9to5Mac). The charts now appear customized for every user browsing the store, as it hides the apps the user already has installed on their device.

That’s a rather interesting move, which compares to the previous algorithm that showed a list with the most popular apps in the store. Now that’s gone, or at least it’s been tweaked, because if you have one of the popular apps installed on the Apple TV, it disappears from the list and another one takes its place. This behaviour doesn’t seem to be replicated by the App Store on other devices.

Equinux developers discovered this by releasing an update to their popular tvOS app, Live TV, which has been at the top of the Top Free app chart almost since day one, they say. After the updated version went live, they noticed that the app had disappeared from the list.

You can try it yourself by downloading any of the top free apps to your Apple TV and then rechecking the list.

Is this the direction Apple is heading? Equinux points to Phil Schiller’s earlier comment, in which he says the App Store should be “a place we all want to visit every day (more good work to come).”