Twitter App Updated to 3.2 with Push Notifications and More

Twitter has just pushed an update to their iPhone and iPad app. The most notable change for the iPhone app right now is the addition of Push Notifications. Here’s what the folks at twitter had to say on their blog about version 3.2:

Whenever an account that you follow mentions you, youâ€™ll immediately receive a notification. Youâ€™ll know who is talking to or about you on Twitter, and youâ€™ll be able to continue the conversation in real-time. Notifications for @mentions will initially be available on SMS and on the latest version of Twitter for iPhone, which you can download today from the App Store. 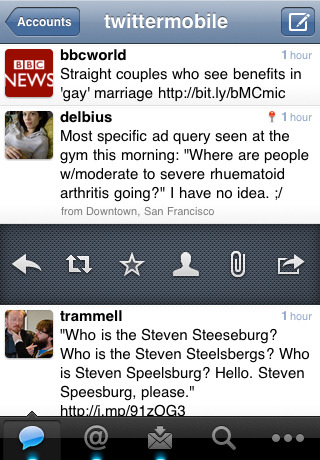 I’ve been using Simplytweet for my iPhone twitter needs, which includes Push. If your client doesn’t have push, Boxcar can push @mentions right to your iPhone for free as well.

Here’s what’s new in the update:

Other changes include Retina display graphics, easy geotagging, and more. For those unaware, the twitter app is formerly known as Tweetie, the brain child of Loren Brichter.