Twitter has acquired Summify, the startup that takes news from all of your personal social media accounts and your favourite blogs and condenses it all down to the most important stories.

The purchase price has not been announced but this marks the second big announcement from Vancouver-based social media startups as HootSuite recently announced hitting 3 million users.

The founders of Summify moved to Vancouver from Romania to be part of Bootup Labs, an organization that provides seed money to accepted startups. Now, according to the Summify blog, the company co-founders and three of their engineers will be moving to San Francisco to work out of the Twitter offices. 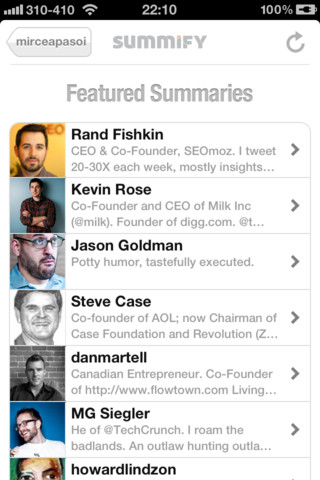 “Our long-term vision at Summify has always been to connect people with the most relevant news for them, in the most efficient manner. As hundreds of millions of people world-wide are signing up and consuming Twitter, we realized it’s the best platform to execute our vision at a truly global scale,”

Your summarized information is available in the Summify companion app or e-mailed directly to you. That service only recently launched in March of 2011 but, if this sounds like a useful utility to you, you’ll now have to wait to get onboard as Summify is no longer accepting new sign ups. The service will remain active for a few weeks until it eventually shuts down.

In its reincarnated form on the Twitter platform, what changes do you expect or hope to see?