With over a billion registered users, Twitter is preparing a third major mobile app interface redesign in the not-too-distant future. A small update is said to be arriving shortly after iOS 7 goes public later this week (September 18), while the richer, prettier, and far more visual interface overhaul is rumoured to be landing later on. 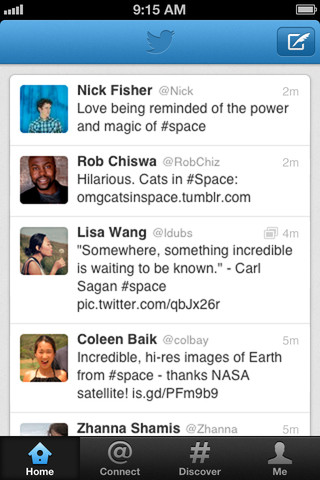 So, what is the rumour mill saying about the new Twitter interface? Well, first of all, the four tabs we have got used to at the bottom are set to be replaced by swiping through different content-focused streams (via AllThingsD).

There will be the main reverse-chronological stream that current users are familiar with, as well as a stream for interactions between other users and conversations they’re having. Notably new, there will also be a stream dedicated entirely to photos shared on Twitter (an idea that Facebook included with its segmented News Feed redesign months ago)

In fact, they say the update will focus on improving the visual experience, with multimedia coming more into focus. This means we can say goodbye to the tap inside the tweet to see the video or photo – they will be shown in the stream.

But the biggest change is rumoured to be a stream dedicated entirely to TV-related tweets and conversations. This appears to be the next step in Twitter’s experiment with a “trending TV show” box at the top of some users’ streams.

That might be attractive to Twitter fanatics, many of whom already espouse Twitter as the go-to second-screen app for real-time online chatter around their favorite shows. And it certainly fits in with Twitter’s vision of itself as the “social soundtrack for TV.”

In other words, this major overhaul is part of the company’s effort to keep up with the current look of social media. By focusing on visual, Facebook and Instagram have gained a lot, while the text-focused Twitter has been left behind somewhat.