Universal iPad Apps Begin To Arrive in the iTunes Store

Universal apps have begun to arrive in Apple’s iTunes App Store. Universal apps work on the iPad, iPhone, and the iPod Touch so you only have to download or pay for them once. Â I really appreciate the developers who made their paid apps universal, many have chosen to develop a separate app so you have to purchase it again if you want the improved iPad user experience. Here are just a few of the universal apps that hit the store today.

Instapaper Pro (iTunes Link) is a free upgrade for existing users and the app contains a beautiful new interface for iPad users. If you are using it on an iPhone it’s the same great app you’re used to. Â If you have never used Instapaper check out the free version (iTunes Link) and add the bookmarklet to your browser, you’ll love reading on your iPhone. 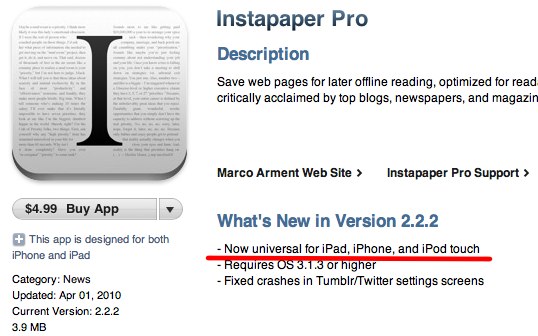 Toodledo (iTunes Link) is another paid app with a free upgrade to the iPad version. Like Instapaper, this app has a new and improved interface for the iPad.

WordPress (iTunes Link) is a free app, that is universal and has a great new iPad interface.

There were several more iPad upgrades available in my iTunes account but I haven’t checked them yet.

What universal apps have you found? I’m especially interested in the paid apps with a free upgrade (Let’s support these developers!) Let me know in the comments or on Twitter @JustinLuey