Valpak: 20,000 Coupons Have Been Loaded Since Passbook Integration

Valpak, a subsidiary of Atlanta-based Cox Media Group Inc. that offers discount coupons for numerous retailers and restaurants, recently updated its Local Savings iPhone app to support Passbook in iOS 6. Today, they have announced that more than 20,000 coupons have been loaded to its iOS app since the Passbook integration, a feature that was rolled out last week. 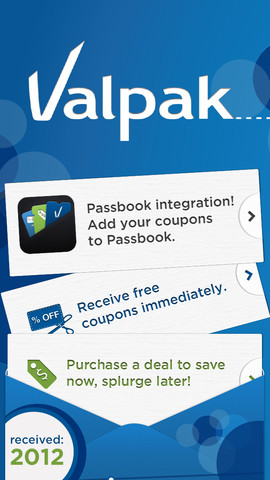 Valpak has been working to build up its mobile presence over the past year to target consumers. Its official iOS app now allows consumers to scroll through the pages of offers and add specific coupons to Passbook, which can be redeemed through a QR code. The coupons are also location-triggered so that when consumers are nearby a merchant, the offer will pop up on their device.

“Our core strategy around digital is anywhere at any time and Passbook fits that perfectly,” said Michael Vivio, president of Cox Target Media, Largo, FL.

“Our job as a provider of advertising – regardless of platform – is to ensure that consumers see our advertisers’ message and by ensuring that we’re in alignment with what we see as the next big thing – that being mobile wallets – it only made sense for us to adopt this platform,” he said.

“Like many other companies, Valpak is focused on ensuring that we’re skating to where the puck is going to be,  and we strongly believe that this development by Apple will be followed in short order by other mobile OS providers.”

In addition to the number of coupons added, Valpak has also noted that the app’s ratings jump from three-and-a-half stars to five stars since incorporating Passbook.