Vex Puzzles App Review – A Fun Workout For Your Brain 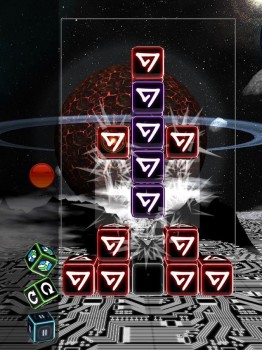 There are a lot of great Canadian developers making a lot of fun apps for our iOS devices. This is true for Itzy Interactive and its latest game Vex Puzzles. It’s the sequel to the independent developers award winning game Vex Blocks. Both are extremely fun and addictive puzzle games. Take a look at my review of Vex Puzzles.

The object of Vex Puzzles is to eliminate all the blocks on the screen in as few moves as possible. You do so by making matches of four or more. These matches can be colour, shapes or a combination of both. Sounds simple enough, but as you progress the puzzles get more difficult. So a linking combination that may work one way, may not necessarily work the other way. So I find it best to sit back and study the board before making any moves.

Speaking of making moves, you do so by either sliding your finger along the screen to connect the blocks or by changing the settings so you can just tap the blocks. For me, I’ve found the sliding the finger method much easier and quicker – because there is a timer once you start to make moves – although making small mistakes is easier in the siding method.

As you progress and the levels get harder, the game introduces new ways and strategies to eliminate the blocks. Itzy Interactive designed the game to take advantage of your iOS devices accelerometer. As you turn your device, the blocks will shift to help you make possible linking patterns. You’ll also be able to surround blocks to eliminate them, use a black hole to make blocks disappear and even use a blaster to destroy several blocks. So as you progress it can become quite difficult to work out that perfect combination of what will lead to eliminating the blocks in as few moves possible and getting that perfect score.

There are two versions of Vex Puzzles in the App Store. A free version and a paid version. In the full version you get 480 puzzles to solve. They are divided into six categories – casual, advanced and expert. There are two packs for each. As you’d expect, the levels in the advanced and expert packs are a lot harder to complete. With the free version of the game you get half as many puzzles, which is still really good, but there are also ads. In my opinion, spend the couple of dollars for the full version. You won’t regret it.

But what if there is a puzzle you just can’t figure out. Vex Puzzles has a solutions function. By tapping on it, it’ll show you how to complete a puzzle in as few moves as possible. But be careful, you’re only given five free solutions and if you want more it will cost you real money.

If you’re up to the challenge, Vex Puzzles also lets you create your own puzzles. Once you’ve created a puzzle you can submit it to Itzy Interactive. One of the developers tells me the best ones will be added as free user puzzle packs later one. So you could see your puzzle in the game one day.

Overall, this is a perfect mobile game. It’s perfect when you you just have a few minutes to spare, or if you want to sit down for a little longer gaming session. Even better, it’s not a mindless button masher — or screen tapper on mobile devices. The game makes you think your moves through. While the free version is incredibly fun, I again recommend spending the couple of dollars to get the full version. Vex Puzzles will keep you coming back for more. Let me know what you think of the game.

Check out Vex Puzzles in the App Store here.