Latest numbers from Onavo Insights, a company that tracks usage of apps across iOS devices in the U.S., reveal that Twitter’s short-form video-sharing app Vine has grown its monthly active users by 50% in the last month, while other video-sharing apps on iOS like Cinemagram, SocialCam and Viddy are all seeing a decline, TechCrunch is reporting. The study also claims that Vine is bigger now than any one of its competitors has been in the past six months. 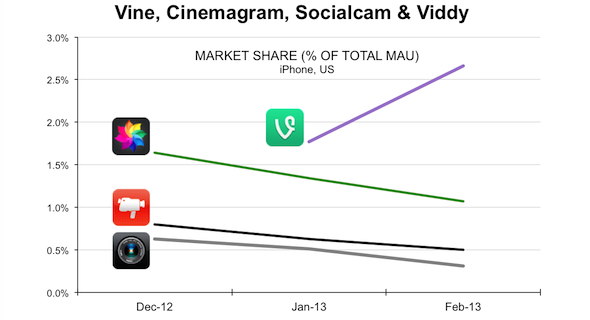 The report notes that Vine was used on 2.66% of all iOS devices in the U.S. by the end of February. In contrast, U.S. device usage of 1.07% was seen for Cinemagram, 0.50% for SocialCam and 0.31% for Viddy during the same time period. Another analytics company, RJ Metrics, has also released similar usage statistics revealing that Vine was used by 2.8% of Twitter’s highly active users with Viddy used by 0.5% and Socialcam by 0.2%.

“One possible message here is that you may have a better chance of succeeding if you’re entering a market that is not yet owned by any one company, regardless of whether you are launching off the back of a wildly popular social media platform or not. Vine was entering a space where its closest competitor was being used by only 1.3% of iPhone owners and falling. Snapchat, by comparison, was being used by 10% and rising when Poke decided to Poke it”

Vine service was introduced by Twitter in January this year, that allows users to attach video clips lasting 6 seconds or less to their tweets.