Walk Score, available as an iPhone app, assigns “walkability” scores for homes and neighborhoods based on the availability of nearby amenities. The app is one of 64 transit apps featured on City-Go-Round.

Front Seat offers an API that will automatically generate walkability scores for listings published by real estate sites including ZipRealty.com, Windermere Real Estate, Zillow.com, and Cyberhomes. Each one point increase in a property’s Walk Score was associated with an increase in value of $500 to $3,000, depending on the market. Walk Score generates a score from zero to 100, with a score of 70 or above indicating a neighborhood where it’s possible to get by without a car .

Living in Calgary, I figured I’d give this app a shot, considering it was created by a US based company. And to my surprise (I had to change the title of the post because of it) there were NO Bus Stops or Train icons on my map. Only locations for stores, schools, shops, malls, even parks. So all in all, this app is only useful if you’d like to see what your “Walking Score” is for your house. This would be useful if your selling, as I mentioned above, but otherwise it’s pretty useless. Let me know what you think? My walk score was 34. I have no idea if that is good or not, but it did tell me I would need a car to go anywhere. Which isn’t really true. 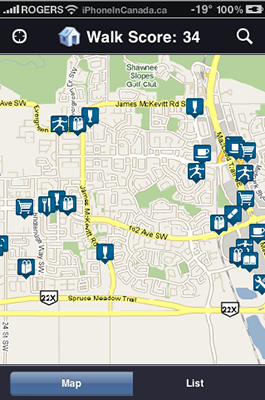