For users of the Westjet iOS app, it has been updated today to support your iPad, along with new iPhone 6 models. On top of bug fixes, there’s now official support for iOS 8, improvements to Passbook boarding passes and also the addition of using your location to locate nearly airports for flight status searches.

What’s New in Version 1.4
You wanted more? We’re giving you more! We’ve optimized our app for your iPad.

Other great stuff in this update:
• In addition to iPad, we’ve optimized the app for iPhone 6 and iPhone 6+ so our app looks awesome on your new device
• Squished bugs and made UI enhancements so everything works better
• This version supports iOS 8 (look at us being all up-to-date!)
• We made improvements to Passbook boarding passes. (Note: Passbook is only available for flights within Canada. To ensure your boarding pass is added to Passbook; you must select the “Add to Passbook” button in the expanded view for each of your flights.)
• App now uses location services to help identify nearby airports for quick flight status searches 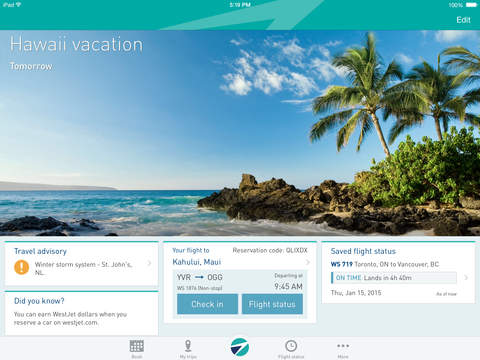 Westjet’s iPhone app launched last May, and introduced Passbook support and flight booking right out of the gate.