What Did She Say For iPhone & iPod Touch

Every once in a while comes an app that at first is just silly, but then you actually use it on someone and it becomes the best part of your day. The app I speak of is called “What Did She Say” and it is a hilarious “That’s what she said” joke app.

What Did She Say by David & Richerd

This is the first joke app that I have seen that actually listens to the surrounding conversations. When the app is running and you are speaking to someone, at the right moment the app will interrupt the conversation with the “that’s what she said” dialogue.

The app recognizes the end or near-end of a conversation and drops its interruption at that time. The listening feature of the app is really what makes it unique, as most other apps of this joke have a button that users must tap. While it’s nice to have the control with a button, the automatic listening feature is rather cool. 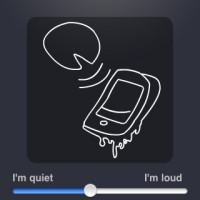 While people have mixed feelings about this joke, such as myself, I could not help but at least attempt to use this app on someone. With that being said, the app is rather rude, so this is definitely an app to save for TGIF, as any other time might reward you with a swift punch to the head. 🙂

Once you’ve had your fun with the app, you can share your experiences from within the app by submitting your story for thousands to see!

What Did She Say is available in the App Store for $0.99.