The WordPress iOS app is an important tool for self-hosted users and it has improved significantly since its initial launch back in July of 2008. It’s incredibly easy to make quick edits on the fly, or to post directly from your iPhone or iPad. Today, WordPress for iOS has been updated to version 3.1, which contains the most significant update yet.

Along with a major new user interface, there is now sidebar navigation that resembles the WordPress layout you would find on the web.

? Major UI Refresh!
– New sidebar menu for quick navigation.
– Sliding panels on the iPad for greatly improved navigation and ease of use.
– Updated colors and graphics.
– Improved sign up experience.
– New app icon.
? Support for Post Formats.
? WordPress.com Reader and Quick Photo added for the iPad.
? New Simple post preview feature for the iPad.
? All-new WordPress.com stats.
? New WordPress.com Friend Finder feature helps you find your friends blogging on WordPress.com.
? Landscape orientation support throughout the app.
? Easy access to your site – view it and access the web dashboard right from the app.
? Last but not least – many reliability improvements and performance tweaks. 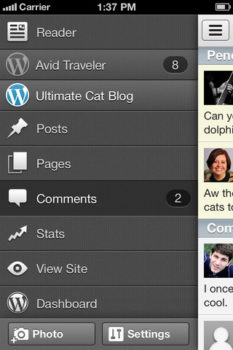 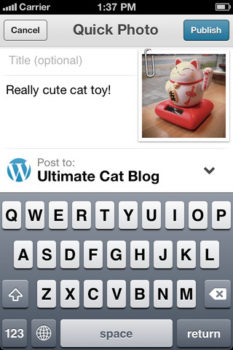 After a quick update to 3.1, the new user interface is quite refreshing and is very easy to use. I love the new addition of colours as it brings a bit of life to the app, and the new sidebar navigation is pretty handy. Kudos to the WordPress team for continuing to improve the stability of this app, which has come a long way since its initial release. Oh, and there’s a new spiffy icon too.

Update: Here’s the official blog post by the WordPress for iOS team about this update.