On Tuesday, XM Radio Canada released its App called “XM Online+” giving iPhone and iPod users the ability to access XM programming from anywhere in the world. This follows suit with Sirius and their application for the iPhone.

â€œMore and more Canadians are plugged in to the online and mobile world and we are thrilled to provide them with a comprehensive service that lets them listen to XM at home, at work or on the go,â€ said Janet Gillespie, Marketing Vice-President of XM Canada.

â€œThis new app is the first among a series that we are working on as we plan to expand our availability on mobile devices for our customers,â€ she added.

The application is being released as a free download through the Canadian iTunes app store, but in order to use it, you will be charged a $2.99 per month surcharge when bundled with an XM satellite radio subscription or $7.99 for XM online+ subscribers.

Users can also test the news service by visiting XMRadio.ca/iPhone and signing up for a 14 day trial. 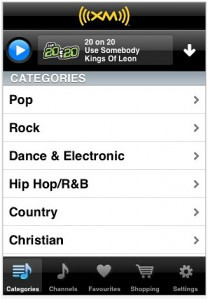