This morning Fortune posted an excellent piece that provides insight into how, after nine months on the job, Apple CEO Tim Cook is evolving Apple and its culture.

The story essentially concludes that under Tim Cook’s leadership, Apple is becoming more open and more corporate, but not in a bad way. After being with Apple for 14 years, Cook is still maintaining Apple’s unique culture, but there are subtle shifts in behaviors that are occuring.

In some examples, it’s shown that Cook is taking actions that Apple needed and that employees wanted. Over the last nine months, Cook has taken a considerable interest in speaking with investors, something Jobs would not do. Moreover, Apple employees quoted in the article praised Cook for being considerably more open and approachable than former CEO Steve Jobs.

With Cook’s background in operations, the Fortune report notes that Cook pushes Apple to innovate and improve its manufacturing processes, for example by funding equipment purchases and other infrastructure with company cash to enable supply chain partners to improve their efficiency and production output.

However this is where the belief that Apple is starting to become more of a traditional company, driven by business-oriented managers and being less dependent on its design and technical knowledge.

If anything, Apple under Tim Cook will embrace efficiency to an even greater degree, especially as the company grows bigger and more complex — to the dismay of those who think techies should rule the roost. “It looks like it has become a more conservative execution engine rather than a pushing-the-envelope engineering engine,” says Max Paley, a former engineering vice president who worked at Apple for 14 years until late 2011. “I’ve been told that any meeting of significance is now always populated by project management and global-supply management,” he says. “When I was there, engineering decided what we wanted, and it was the job of product management and supply management to go get it. It shows a shift in priority.”

Overall the article is an amazing contrast of the management styles of Jobs and Cook and how subtle changes under Cook’s leadership are making larger waves in the company. 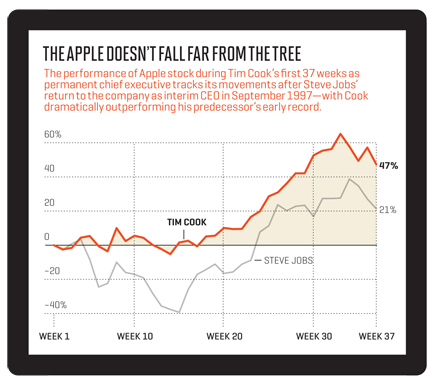