Alto’s Adventure: The Spirit of the Mountain coming to Apple Arcade on March 25 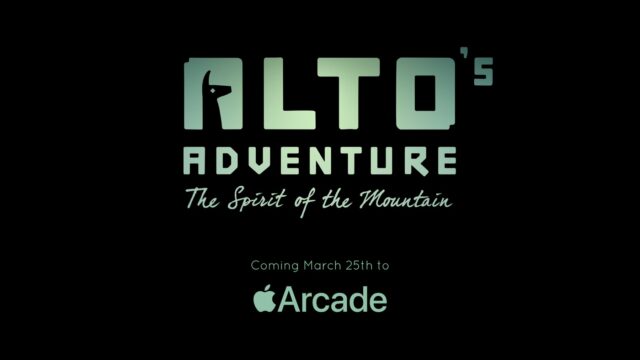 Canadian-studio Snowman is due to release Alto’s Adventure: The Spirit of the Mountain on Apple Arcade later this month.

On Twitter, the studio, in collaboration with Land & Sea, made the announcement that the follow-up to Alto’s Adventure is right around the corner. “Embark on a journey to discover what lies at the heart of the mountain,” the post writes while also revealing that the game will be landing on Apple’s gaming service on Friday, March 25.

On March 25th, adventurers everywhere will embark on a journey to discover what lies at the heart of the mountain. Alto’s Adventure: The Spirit of the Mountain is coming soon to @AppleArcade. https://t.co/pwMVLMOFHV pic.twitter.com/j9ERlflkjR

Alto’s Adventure: The Spirit of the Mountain is a remaster of 2015’s Alto’s Adventure. The endless snowboarding game sees players traverse through diverse environments like villages, forests, ruins and more. Players chain together combos to unlock items and new abilities.

According to the App Store listing, the game will see new features, set pieces, and a new playable character. “Navigate your way through a series of never before seen set pieces, revealing the mysterious Pitu, a brand new playable character along the way,” the page states. Additionally, it’s revealed that the game will offer 25 brand new goals, designed to be played as Pitu. These goals will utilize the character’s unique abilities and tricks.

Alto’s Adventure: The Spirit of the Mountain is available to preorder now for Apple Arcade subscribers. Once launched, the game will be playable on iPhone, iPad, Mac, and Apple TV.