Topeka’s Brian White has today issued a statement that Apple’s selloff of nearly 25% from its recent highs has been “insanely insane” , Fortune is reporting. 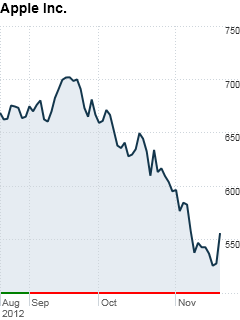 Despite AAPL’s eight-week slide that has knocked approximately 28% off its price and $187 billion off company’s market cap, White has urged the investors who have missed Apple’s stock, should buy the shares now as the price will soon go up again. He added that we don’t expect Apple to grow EPS by 92% per annum over the next five years, though its 20-30% growth is reasonable based on the company’s low market share in mobile phones and PCs.

“The sell-off,” White wrote his clients Monday, “has gotten to the point of being ‘insanely insane.'” I quote:

“Those investors that have missed Apple or have been under-weight the stock,” he concludes, “now have another opportunity to buy Apple before sentiment takes a turn for the positive during what has historically been the strongest quarter of the year for the stock.”

It must be noted that White’s street-high $1,111 price target set last April, has been more than double Apple’s stock price for the past seven trading sessions.