Apple today confirmed the arrival of the 128 GB iPad 4 with Wi-Fi and Cellular + Wi-Fi. The company’s move provides twice the storage capacity of the 64 GB models in order to store more valuable content such as photos, projects, presentations, movies, music, apps and more. 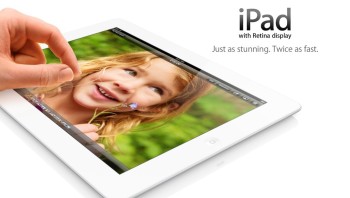 “With more than 120 million iPads sold, it’s clear that customers around the world love their iPads, and everyday they are finding more great reasons to work, learn and play on their iPads rather than their old PCs,” said Philip Schiller, Apple’s senior vice president of Worldwide Marketing. “With twice the storage capacity and an unparalleled selection of over 300,000 native iPad apps, enterprises, educators and artists have even more reasons to use iPad for all their business and personal needs.”

Rumours of the 128 GB model began to surface right after the fifth beta of iOS 6.1 was released on Saturday — which turned out to be the exact build that was released to the public on Monday — and later confirmed by 9to5Mac’s sources, who also provided pricing info.

The new models will hit the stores and Apple’s online store on 5 February, both in black and white, for a suggested retail price of $799 for the Wi-Fi only model, and $929 for the Cellular + Wi-Fi model.