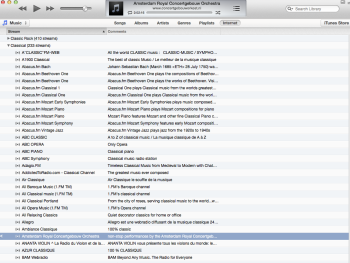 MacRumors reports that Apple has contacted Internet radio stations asking them to provide cover art. The e-mail is signed by the iTunes Internet Radio Team. This appears to be part of Apple’s effort to bring Internet radio services to iOS.

As the e-mail notes, the Internet Radio cover art provided is not currently displayed to listeners.

The iTunes Store now requires cover art for Internet Radio stations. The cover art files must be 1400 x 1400 pixels in JPG or PNG format using RGB color space. The image URL must end in “.jpg”, “.jpeg” or “.png”. To add cover art to your station, send an email to itunesradio@apple.com including your contact name, station name and cover art file.

Cover art should avoid pixelation. Any text should be legible at reduced image sizes on small devices. Note that Internet Radio cover art is not currently displayed.

I often use the iTunes radio on my Mac — the tab was recently renamed Internet — and it features an impressive amount of streaming radio stations, some of which work and some that don’t. The list includes many foreign stations as well.

During the Worldwide Developers Conference 2013, Apple introduced iTunes Radio which is a feature included in iOS 7. This iTunes Radio is currently limited to the U.S., and it is a Pandora-like music streaming service allowing listeners to listen to songs licensed by Apple.