Apple Customer Experience Worse than that of Amazon, Microsoft, and Samsung [Survey]

After years of ranking high in customer experience surveys, in 2014 Apple has dropped behind its rivals for the first time, a Forrester Research study has found. Mobile devices manufactured by Amazon, Samsung, and Sony all ranked higher than the Apple iDevices (via The Wall Street Journal).

The Forrester Research survey is the third annual study attempting to quantify customer experience. The market research company surveyed 7,500 US respondents and assigned a customer-experience index to each company based on how enjoyable, easy-to-use, and effective these devices were in use.

Amazon scored highest among the 17 consumer-electronics manufacturers operating in North America. It was the only manufacturer to garner an “excellent” rating of 91 for Kindle customers.

Sony came in second with a rating of 83, while Microsoft and Samsung followed one point behind at 82. Apple scored an 81. All three brands rated below Apple in the 2013 survey. Any score between 76 and 85 is deemed “good” by the survey’s findings. 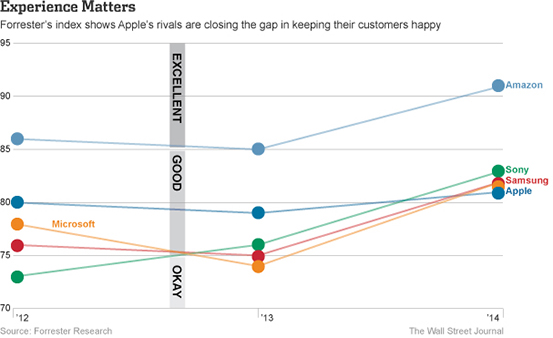 As you can see from the above image, despite ranking lower than Amazon, Sony, Samsung, and Microsoft, Apple has improved its score. Back in 2012, when Forrester initiated the survey, Apple scored 80 points, and the following year dropped below that. Now, the company’s score has jumped to 81 in 2014.