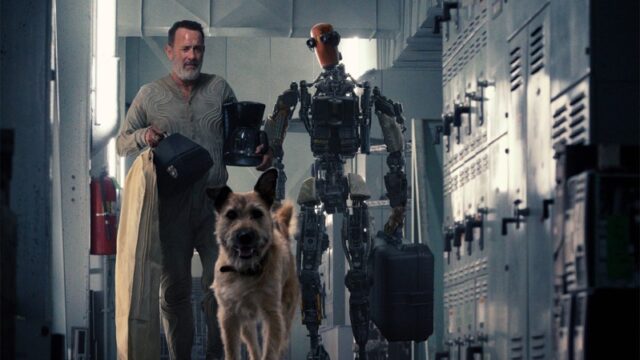 Apple has released a new official trailer for ‘Finch’, the upcoming Apple TV+ film starring Tom Hanks. The film is set to premiere on the streaming service on November 5, 2021.

Finch will mark the second project Tom Hanks has starred in on Apple TV+. Following ‘Greyhound’, which became available to stream on July 10, 2020, Hanks returns in a post-apocalyptic story of a man, a robot, and a dog.

Hanks plays the titular character Finch, a survivor in a post-apocalyptic world. He has survived a decade in a bunker following the devastating effects caused by a solar flare, which reduced the earth to a wasteland. He’s survived alongside his canine companion Goodyear. Throughout his time inside the bunker, Finch builds a robot friend named Jeff. The crux of the film will see the trio travel to find a new home as an incoming storm threatens their safety.

Finch has been written by Craig Luck and Ivor Powell. The film is directed by Miguel Sapochnik, who has directed multiple episodes of ‘Game of Thrones.’ Sapochnik has also been a director on ‘Altered Carbon,’ ‘Iron Fist,’ and ‘True Detective’.  Sapochnik will also serve as executive producer alongside Frank Smith, Andy Berman, and Naia Cucukov. Robert Zemeckis is also attached as a producer on the film.

Apple has been steadily increasing its output of film on the streaming service. On top of the aforementioned Greyhound, Apple TV+ viewers have been able to enjoy such films as ‘CODA,’ ‘On the Rocks,’ and ‘Cherry.’ Following Finch, Apple TV+ will receive ‘Swan Song,’ ‘The Tragedy of Macbeth,’ and ‘Luck.”