A new patent application titled “Detachable wireless listening device” published by U.S. Patent and Trademark Office today suggests that Apple is developing a unique set of “hybrid” headphones, primarily aimed at withstanding vigorous athletic activity, reports the Apple Insider. It is possible that Apple may be working to design a pair of headphones that uses wireless transmission technology, such as Bluetooth, notes the source. 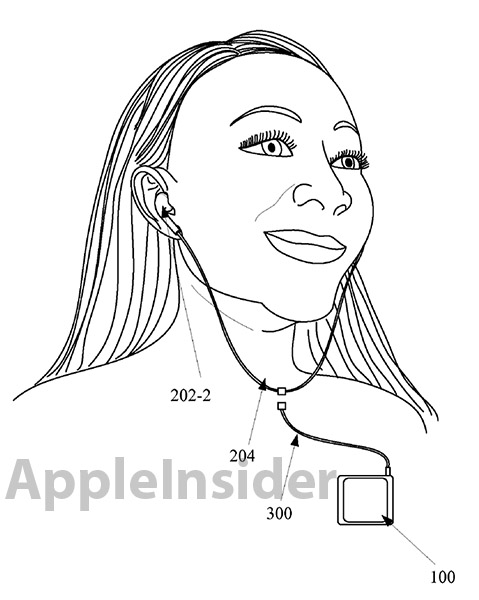 The patent filing details that regular wired head earbuds are susceptible to becoming entangled while the end user is participating in physical activity. To solve this issue, Apple suggests a type of hybrid system that can receive audio data through a cable as with traditional earbuds, but can also be detached from the device and operate wirelessly when needed.

The clever “listening device” is connected to the player by either a physical clip or detent, or a series of magnets. When attached, the headphones are able to use the cord as an RF antenna with data being processed by the host device, and a means of power for charging a set of built-in batteries. While connected, the headphones receive audio signals through the cable and are able to tap into the media player’s power supply if needed, thus saving precious energy for untethered use.

If the headphones becomes detached, either by the user or unintentionally, the host device seamlessly pauses the charging process, activates a wireless module and begins to send audio over Bluetooth of some other form of radio communication.

The filing also mentions that stereo audio can also be provided to the wireless headset by assigning each side a unique wireless address.

The “listening device” patent was filed in March 2011 with Jorge S. Fino credited as its inventor