Last week, Apple started accepting donations towards the Hurricane Sandy relief efforts through its iTunes Store, enabling users to donate money directly to the American Red Cross in denominations of $5, $10, $25, $50, $100, and $200 using their existing iTunes accounts. Today, Apple has announced that it will donate $2.5 million to the Red Cross in order to benefit the Hurricane Sandy victims (via 9to5Mac). 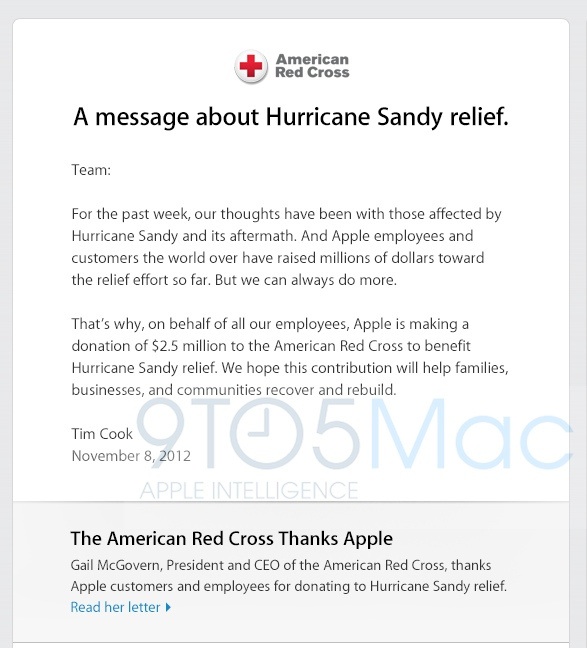 The source has posted an email sent by CEO Tim Cook to all Apple employees announcing that the company will donate $2.5 million in support of Hurricane Sandy relief efforts.

For the past week, our thoughts have been with those affected by Hurricane Sandy and its aftermath. And Apple employees and customers the world over have raised millions of dollars toward the relief effort so far. But we can always do more.

That’s why, on behalf of all our employees, Apple is making a donation of $2.5 million to the American Red Cross to benefit Hurricane Sandy relief. We hope this contribution will help families, businesses, and communities recover and rebuild.

The company also revealed it has collected millions from both Apple customers and employees through its iTunes donations program.

The Apple TV+ original series Shrinking is now available to stream in Canada. Jason Segel and Harrison Ford star in a comedic drama series centred around a therapist that decided to approach his role in a new way by taking the filter off and giving unbridled honesty and advice. Shrinking stars Segel as James Lair,...
Steve Vegvari
16 hours ago