It was just yesterday that Tim Cook said Apple is taking steps to make their products more affordable, and today the company announced they have updated the Retina Display MacBook Pro line with new processors and new pricing. 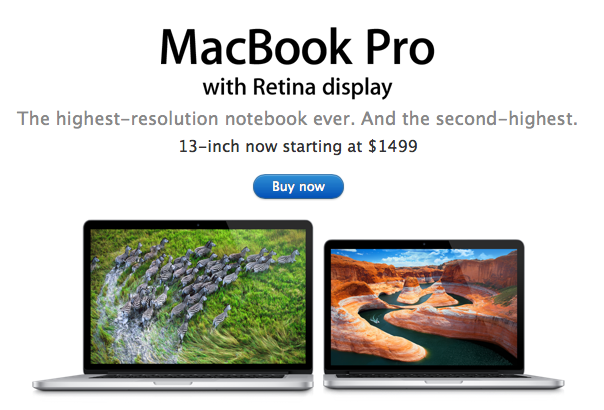 As the press release emphasizes, Apple has made the high-end MacBook Pro even faster and at the same time more affordable, despite the processor update. Starting today, the 13-inch MacBook Pro with Retina Display starts at $1,499 for 128 GB of flash storage, and $1,699 for a new 2.6 GHz processor and 256 GB of flash. On the other hand, the 15-inch MacBook Pro with Retina Display now sports a much faster 2.4 GHz, quad-core processor, and the high-end 15-inch portable comes with a new 2.7 GHz, quad-core processor and 16 GB of RAM.

In addition to the aforementioned updates in terms of processors and pricing, Apple today announced that the 13-inch MacBook Air with 256 GB of flash features a new price: $1,399.

Update: there is also just one configuration available for the 15″ MacBook Pro, non-Retina.