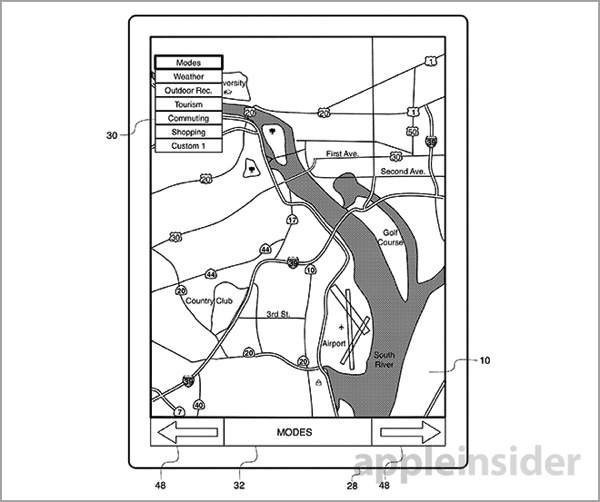 A new Apple patent application published today by the US Patent and Trademark Office, spotted by AppleInsider, gives a sneak peak into the company’s future plans for Maps application enhancements.

The patent details an interactive layered mapping program, allowing users to view different layers of information based on different factors — for example, location.

According to the document, the map would be able to emphasize any surrounding features of a selected point of interest, which in many cases will be a user’s current position. The filing gives the example of a user who is viewing a weather-centric layer and sees a storm approaching. With Apple’s invention, the person can quickly switch to a different viewing mode to locate a shopping mall or other structure relatively close to their position. 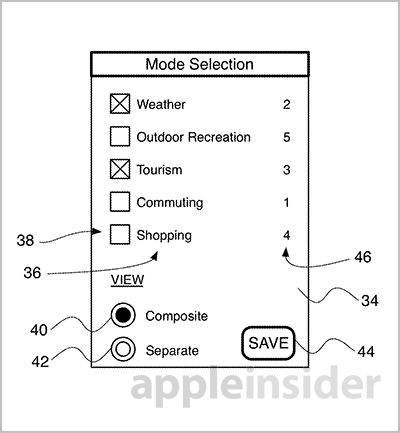 As you can see from the above image, the Maps app can include a combination of layered information that overlaps, and the displayed information can be adjusted based on the user’s demand.

What’s interesting is how Apple refines searches based on the applied mapping mode: For example, searching for food could bring up nearby restaurants when in default mapping mode, but when hiking mode is applied, the results for the same “food” keyword would be camping supply stores etc.

Another important enhancement described in the patent application is the ability to obtain real-time information about specific features or landmarks.

Further, a user can touch two points on the map to create a route. Currently, the iOS and OS X Maps apps support route making through the use of addressed or dropped pins. The proposed touch UI automatically generates route data like distance, then recommends which one to select based on an artificial situational awareness. If a person is traveling in one direction and searches for a hotel, the app would return only those establishments located in the general direction they are moving.

The described interactive Maps application would contain all the necessary and various information a user would need about a certain region, all of which would be available quickly and in a unified manner.

Another great enhancement is the ability to display relevant data for a specific route when in tourist mode, for example. In this scenario, the map can display contextual information about the history of the location, and users would access the data on-screen or via audio.

It is still unknown whether Apple has already investigated the aforementioned mapping features or if these features will be part of a future software update, but these features would be a welcome addition to its Maps application.

Apple credits Christopher Blumenberg Jaron I. Waldman, Marcel van Os and Richard J. Williamson as its inventors, and the patent was filed for in 2012.