In a newly filed patent spotted by AppleInsider, Apple goes beyond the docking station, adding functions such as Siri. US Patent Application No. 2,013,0325,479 for a “Smart dock for activating a voice recognition mode of a portable electronic device” describes a dock of a portable electronic device (in our case an iPhone) comprising of multiple parts: a housing with touch screen, and built-in microphone and speakers alongside an internal processor. 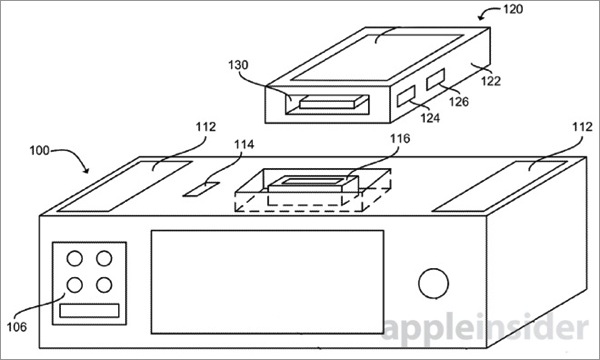 The dock won’t feature Siri on board, but will listen to specific prompts as soon as the iPhone or iPad is connected to it. As the patent description details, the voice recognition and heavy processing work will be done by the connected iDevice.

In use, the user will be able to configure the dock to a specific audio prompt, which will activate the unit and the accessible services. Based on the configured prompt, the dock will use its built-in microphone to filter out ambient noise, and when the prompt is detected, it will allow a voice recognition feature such as Siri. For example, if the iDevice is connected to the dock, users can make modifications in their calendar simply by giving this task by speaking the appropriate prompt and verbal cues into the dock and connected iDevice.

The patent credits Scott Krueger, Jesse Dorogusker and Erik Wang as inventors, and was first filed for last year in May.