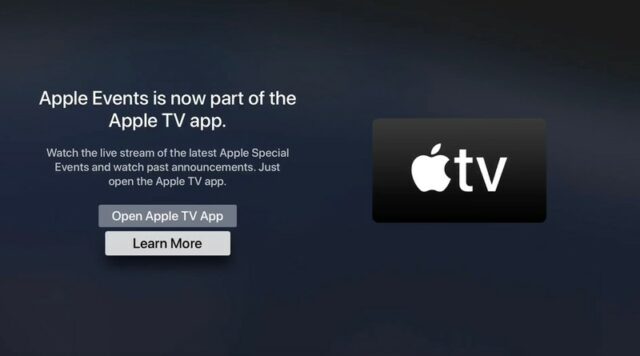 Ahead of Apple’s World Wide Developers Conference (WWDC), Apple’s Events app has been integrated into the Apple TV app.

Reported by MacRumors, Apple has aggregated the tvOS Events app directly into the Apple TV app. Searching for the Events on the Apple TV’s app store and users will find a notice signalling the switch. Users can then download the Events app, which will allow users to set a schedule ahead of this coming week’s WWDC.

Viewers can now more easily access the WWDC keynote on Monday as well as potentially stream developer sessions as they are conducted. As with many other conferences in the tech industry, WWDC has forgone a physical conference and will be a digital experience, highlighting new products, software, and more.

The benefit of having access to the Events app directly through the Apple TV app is to give viewers an easy method to stream Apple’s special events on non-Apple devices which still utilize the Apple TV app, such as a Smart TV.

WWDC is set to begin with its keynote on Monday, June 22nd at 1 PM EST. The conference can be viewed on Apple TV, Apple’s Events website, or on YouTube.