The 14th Annual Harris Poll Reputation Quotient Study, which measures various dimensions that comprise reputation and influence consumer behaviour, has revealed that technology is the most reputable industry in corporate America. According to the 2013 poll, Amazon, Apple, The Walt Disney Company, Google and Johnson & Johnson are the top 5 companies with the best reputations in the country (via PR Newswire). 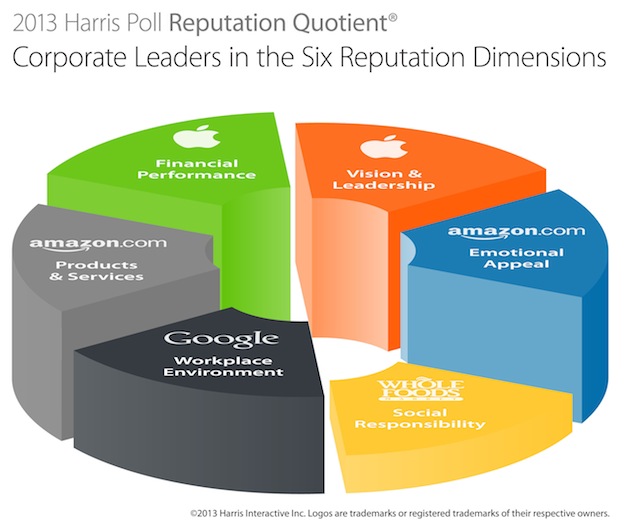 The numbers indicate that only six companies achieved RQ scores of eighty and above, which signifies a great reputation, 25% fewer companies than in 2012 and nearly two-thirds less than just two years ago. Earning the highest reputation this year is Amazon.com, edged out last year’s most reputable company, Apple, which is ranked second this year. This is Amazon’s first time earning the top ranking, but the fifth consecutive year with a great reputation score, notes the source.

The results for Apple and Google are equally as impressive as those for Amazon and continue a compelling trend that has been developing for the past few years – companies that begin in the technology sector, which is by far and away the highest-rated industry when it comes to reputation, absorb the reputation equity from the industry, then transcend the industry to become a more multi-faceted business. Companies that are able to do this are perceived to “Play A Valuable Social Role,” a characteristic, which according to the RQ study, has become a key driver of reputation.

RQ measures six dimensions that comprise reputation and influence consumer behavior. The dimensions and the 2013 leaders are:

Amazon, Apple, and Google earn high marks for the other drivers of great reputation as well; Trust, Admiration, Respect, Outperforming Their Competition, and Being A Great Company To Work For.