Apple tops consumer tech companies as its products accounted for the largest share of revenue, despite being the third largest consumer technology retailer in the US last year. 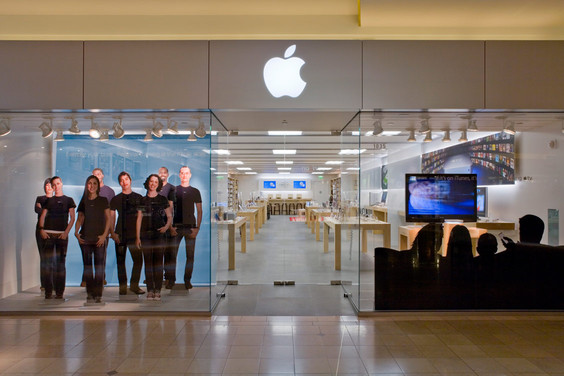 A new report signed by The NPD Group (via AppleInsider) reveals that Apple grabbed 19.9% of all domestic consumer technology sales based on revenue during 2012, up from 17.3% reported for 2011. 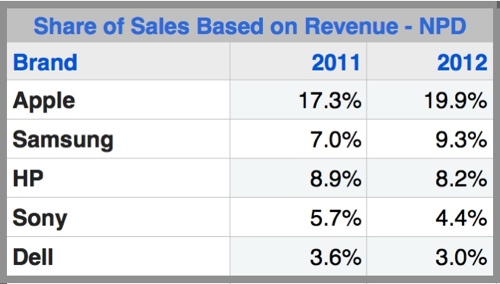 It was an easy victory over Samsung, as Apple’s success in the US is backed by numerous market research reports. However, the South Korean rival came up second with 9.3%, up from 7% reported for 2011. Turns out Apple and Samsung are the only ones growing in the US, as the share of revenue for the rest of the top five – HP, Sony and Dell – dropped compared to 2011, to 8.2% from 8.9% and to 3% from 4.4% respectively.

According to the NPD Group’s report, Apple and Samsung accounted for $6.5 billion in increased sales last year, while the rest of industry saw sales decline by nearly $9.5 billion – triggering a 2% decline of retail sales in the US despite the increase recorded by Apple and Samsung.

“While sales fell in consumer technology for the second consecutive year, there was an uptick in Q4 which is cause for optimism,” said Stephen Baker, vice president of industry analysis at NPD. “After struggles with declining categories, and increasingly saturated markets over the last few years, fourth quarter’s results may be the first sign that even as a mature industry consumer technology can grow again, albeit with a very different dynamic than in previous growth spurts.”

Following Best Buy and Walmart, Apple also took third place among consumer technology retailers, ahead of Amazon and Staples, which took the forth the fifth place.