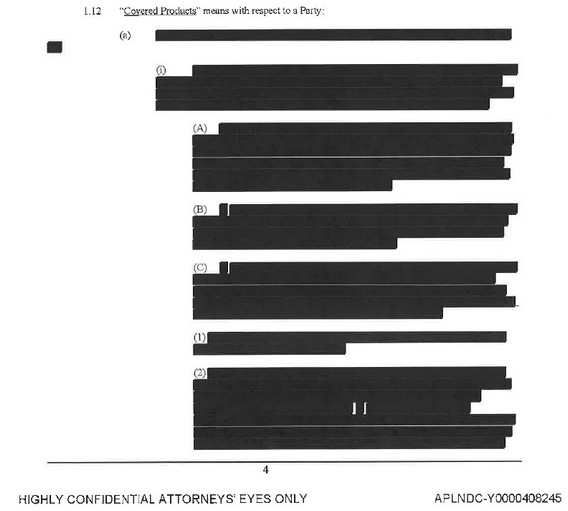 A few days ago Judge Judy Koh ruled the Apple-HTC settlement agreement details would not sealed (minus the pricing and royalty rates) from public view. Originally Apple and HTC agreed to show Samsung a redacted version of the agreement but U.S. court Judge Paul Grewal overruled and offered the entire document available for attorneys-eyes-only.

Now, the 140 page Apple-HTC settlement agreement has been made available online for the public to see, courtesy of Samsung reports AllThingsD. There are heavily blacked out areas but some important points are below:

According to the document, both sides are getting a nonexclusive, nontransferrable and non-sublicensable license to certain of the other’s patents. Apple also agrees not to sue HTC over certain covered products, though the specific products are redacted.

The agreement also appears to exclude any of Apple’s design patents and nine specified HTC patents as well as coverage for any products that are defined as cloning an Apple product. (An arbitration process is outlined should Apple feel that HTC has released a “cloned” product.)

You can check out the document yourself in the Scribd embed below:

For an extensive breakdown of the agreement and what it means, hit up FOSSpatents.