Apple is Selling an Android-powered Device in Apple Store

Maybe one of the most surprising and amusing facts of the day: Apple is selling an Android-running device right in its Apple Store. I think it is pretty obvious that the word Android doesn’t show up in the product description, but the device is controlled by Android OS, despite the “thermonuclear war” Steve Jobs swore against this mobile OS.

Yes, I am talking about the Oakley Airwave Goggle, retailing for $599.95 through Apple’s online store. 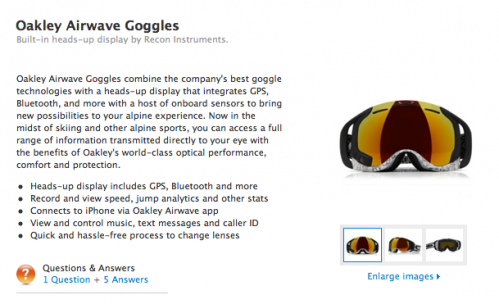 As the description details, the product is an awesome piece of tech, that combines the company’s (Recon Instruments) best goggle technologies with a heads-up display integrating GPS, Bluetooth and more, providing a great addition for alpine sport lovers.

The recently released product combines Recon’s HUD technology with Oakley’ best goggle technologies. What Apple doesn’t mention on the item description is that:

Recon’s HUD is powered by their proprietary Android OS micro-computer, allowing app developers to leverage Recon Instruments Software Development Kit (SDK) to design the first apps for HUD technology. Through apps, the Recon HUD is fully customizable by the user. For example, they may want real-time weather updates, or perhaps they wish to monitor their heart rate. All this and much more is possible.

Does this mean the company is open to a new relationship with Google and Android powered devices? What do you think?

[Via Cult of Mac]