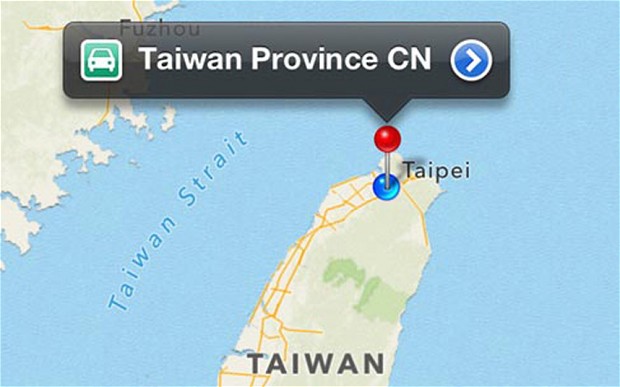 Taiwan demands Apple immediately to issue changes to its Maps application that identifies the island nation as a province of China, The Telegraph reports.

After officials allegedly discovered that the Maps application on both iOS 7 and Mac OS X 10.9 Mavericks lists the country as China Taiwan province, they expressed intense dissatisfaction and demanded the Cupertino, California-based company make an immediate correction to the application.

The Ministry of Foreign Affairs in Taipei instructed its office in San Francisco to demand that Apple make an immediate correction to the software.
“We have made representations to Apple,” Kelly Hsieh, head of the ministry’s Department of North American Affairs, told reporters in Taipei.

“The designation of the mapping system has apparently deviated from the truth and has degraded our country’s sovereignty,” The China Post reported Hsieh as saying. “Matters like this must not be compromised.”

In fact, this is a quite delicate subject, and Taiwan is very sensitive as to how it is described in international circles. It prefers the name “Republic of China,” which officially has been recognized by 23 countries.

Beijing, on the other hand, has the position that Taiwan is part of the greater China. While there were sparks between the two parties, the relationship has improved in recent years.

Despite Apple’s efforts to improve the heavily criticized Maps application, there are severe glitches on the world map it presents. This is the second time Taiwan demanded immediate correction from Apple in less than a year: a few months ago it made headlines that Apple exposed the location of a secret radar station in northern Hsinchu County.