Apple may drop the IR proximity sensors currently used in the iPhone in favor of sonar tech. Or at least it is working on this technology, as a recently granted US patent shows. 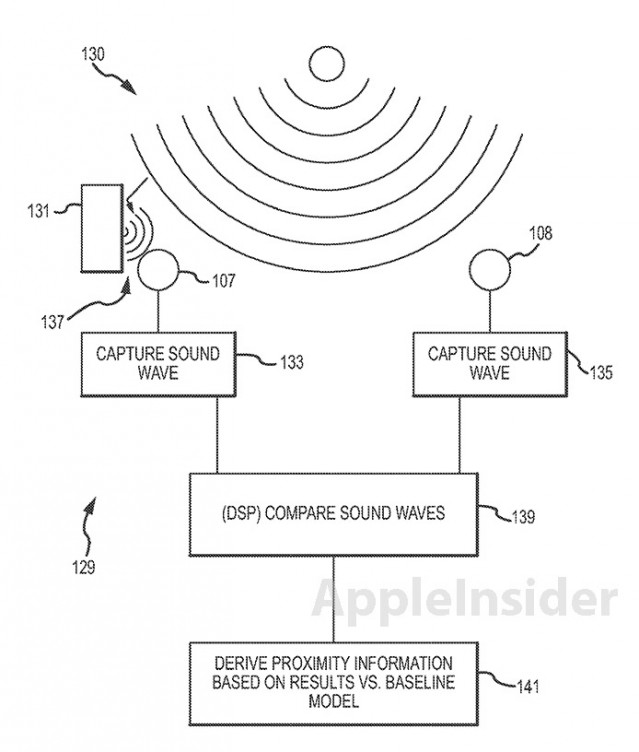 According to the “Passive proximity detection” patent description, there is no need for an IR sensor, as the sonar system can detect how far away an object is by using sound waves. The filing gives a detailed description of the system: to detect an object’s distance the system uses two wave sound samples and compares them to determine the object’s proximity changes. Obviously they need a transducer such as a microphone to make this happen.

Techniques and devices are disclosed for utilizing passively received audio signals to determine proximity of devices to other objects. In one embodiment, a method of passive proximity detection is provided that includes sensing a first sound wave using a first audio transducer and generating a first signal representative of the first sound wave. A second sound wave is also sensed and a second signal is generated. The method includes comparing characteristics of the first and second signals using a processor to determine if differences between the first and second signals indicate the first audio transducer is proximately located to another object.

Apple’s innovation uses basic acoustic principles and applies it through modern electronics, using a transducer similar to a microphone. By using two microphones placed at different spots on the iPhone (top and bottom for example) the response signal can inform the sensor whether the object is closer to one or to the other. The transducers (microphones) will pick up the signal and send it to a processor, which will compare the signals to determine the location of the external object (for example whether your face is near to the top of the iPhone).

The iPhone has three microphones already, so it remains to be seen whether Apple will use them to implement this technology.

In a recent interview, Apple engineer Esge Andersen discussed how the company achieved improved sound quality regarding the AirPods Pro 2. Much of the improvements came without the integration of lossless audio and it is all thanks to improved airflow instead. Speaking with What Hi-Fi?, Andersen pulled back the curtain about the improvements to audio...
Steve Vegvari
19 hours ago