A freshly granted patent reveals that Apple is exploring the use of bayonet lens mounts in its future iPhone or iPod products (via AppleInsider).

The US Patent No. 8,687,299, for a “Bayonet attachment mechanism,” describes a mount that is both utile and aesthetically fits into the design we are used to, and it can be used to fasten lenses to the handset.

Of course, there are multiple ways to attach a lens to the iPhone’s body, but Apple went with the bayonet-style mount due to its integration with the back camera’s bezel. 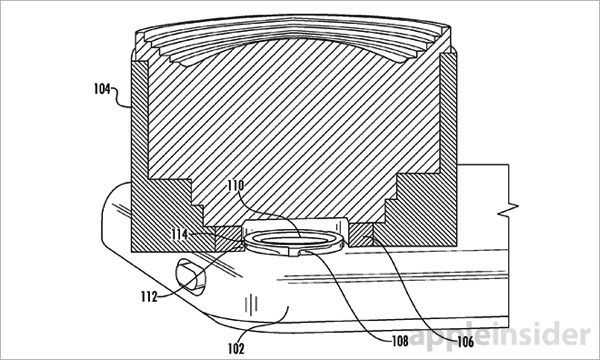 As seen above, the iPhone-side bayonets are substantially hidden within the camera surround, which would protrude slightly above the rear case. A lens element with interleaving bayonets can be aligned via a guide dot and rotated until a secure interference hold is achieved. […] Detents and inserts are disposed within the bayonet mechanism to provide an increasingly tight torque lock when rotating in a certain direction. […] Once the detents on both mechanisms are engaged, stop members halt further rotation, denoting a secure fit and preventing mechanical damage.

Risks, however, are present, and to prevent breakage (in case the handset is dropped from height), Apple’s invention describes a ramped surface incorporated into the bayonet mechanism allowing the lens to decouple from the device without rotating.

Apple’s patent was first filed for in 2012 and credits Emery A. Sanford and Dominic C. Toselli as investors.