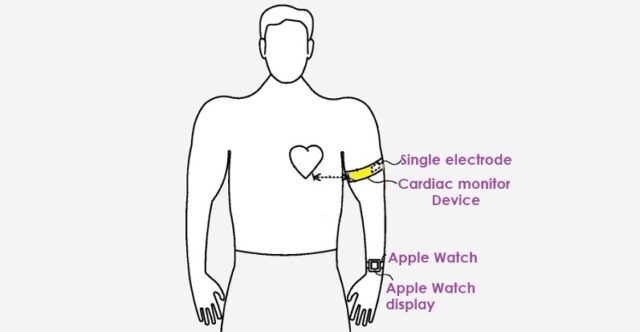 Apple has been granted a patent from the U.S. Patent and Trademark Office for a new Cardiac Monitoring device. This monitor is shown to be an armband that works in conjunction with Apple Watch.

The device is described as a cardiac monitor and is able to detect the electric field of the heart. Via PatentlyApple, many conventional will require at least two electrodes to be in physical contact with the user wearing the device. However, the two electrodes can be finicky as the wearer’s posture and movement can affect proper readings.

One electrode is also shown to be placed in the armband of the monitor device. In order to complete a circuit and effectively read the electric activity of the heart, Apple’s new patent includes an antenna that may be utilized as a workaround for the second electrode.

Data collected by the armband can then be wirelessly transferred and read on a smartphone, tablet, or smartwatch. Another example given is if the user were to have the monitor worn continuously, results could then be communicated to the wearer’s Apple Watch over days, weeks, or even months.

Much like other patents granted to Apple, there’s no guarantee that a device of this sort will make its way to a consumer market. Apple could very well be experimenting with new technology that could one day help bolster the health and wearable segment of its business.