In a new patent application for “Network access using short-range connectability“, Apple details a new way of connecting, sharing a network with a second device, using low-power communications, such as Bluetooth. The described technology could lead us closer to understanding what technology Apple could use in its rumoured iWatch (via AppleInsider). 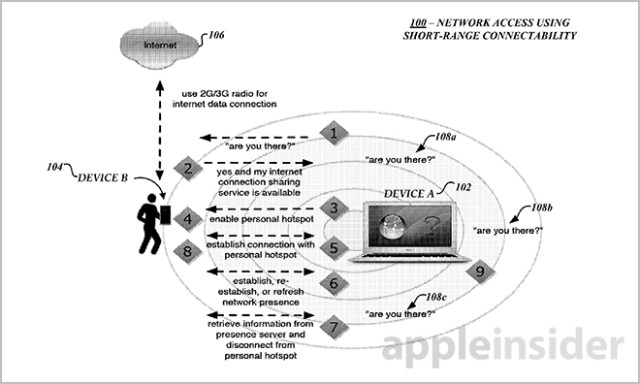 The method of preserving battery life and maintaining connectivity is similar to the existing Bluetooth technology: the primary device doesn’t have to have a built-in radio receiver, it’s enough for the second device to have one. The first device, however, is able to establish a connection with a remote network, and as the two devices are paired, the second device can provide the necessary communication access by allowing the first device to share data over protocols such as Bluetooth.

Of course, the connection allows push notifications, messages, emails, news, and connection to iCloud services. Preserving battery life is important; therefore, as the task is complete, the shared connection is severed by the host device, and both devices return to low-power sleep mode.

In this manner, users can leverage their mobile radio communication devices, such as their cell phones, to provide network access to their other devices without having to manually enable such connections. In turn, the other devices can benefit from the network access while remaining in low-power mode during a short-range connection that uses a low-power enabled connection, the patent description reads.

The patent application doesn’t specifically mention a watch, but the described technology’s low-power capabilities are in line with features rumoured to be incorporated in the iWatch.

Apple’s patent application was filed in March and credits Daniel Borges, Michael Jason Giles, and Michael Larson as its inventors.

The Apple TV+ original series Shrinking is now available to stream in Canada. Jason Segel and Harrison Ford star in a comedic drama series centred around a therapist that decided to approach his role in a new way by taking the filter off and giving unbridled honesty and advice. Shrinking stars Segel as James Lair,...
Steve Vegvari
12 hours ago