Discerning hard presses from soft ones is the next big development for touchscreen devices, and Apple already has a patented solution for it (via AppleInsider).

To achieve that, Apple plans to use one or more IR transmitters under the bezels of the touchscreen, which will emit IR light at a specific angle into the cover glass. Apple describes multiple methods of placing IR transmitters, with each solution having the same result: The emitted IR light reaches the receiver, and the reading differs depending on whether the light interfaces with the user’s finger or with the air. 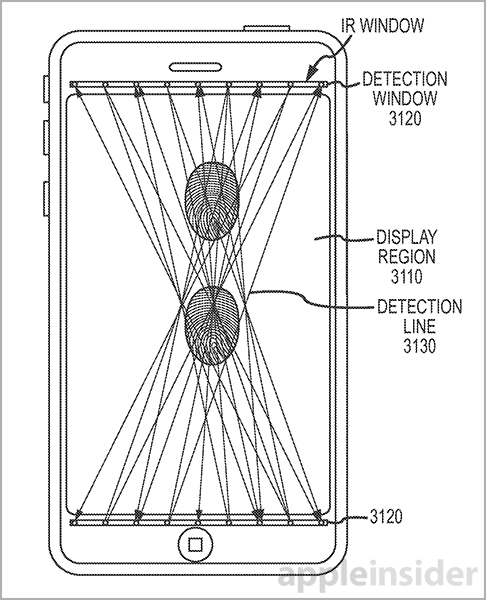 Importantly, measurement of attenuated reflection are used to determine whether infrared light reflected from a surface of a cover glass is absorbed by a finger or reflected by a glass-ambient air interface. In this way, the system is able to measure temporal touches that are then used to infer force.

In another embodiment, the patent application describes a solution where the IR transmitters and receivers are integrated into the OLED display as a fourth colour, infrared, which is not visible to the user. This allows the infrared transmitters to transmit infrared light without the user’s eye detecting such activity.

Data coming from the touchscreen and the FTIR is used to give an accurate reading of the force applied to the touchscreen, which also allows the device to determine smudges or inadvertent wetting.

The patent was first filed for in 2012, and Apple credits Martin P. Grunthaner, Peter W. Richards, Romain A. Teil, and Steven P. Hoteling as its inventors.