Apple is looking to boost the security of iDevices and Macs, by using facial recognition technology, according to a patent granted today by the US Patent and Trademark Office. US Patent No. 8,600,120, for “Personal computing device control using face detection and recognition”, describes a technology comprised from three systems working together to enable or hide content according to whether or not the user is authorized (via AppleInsider). 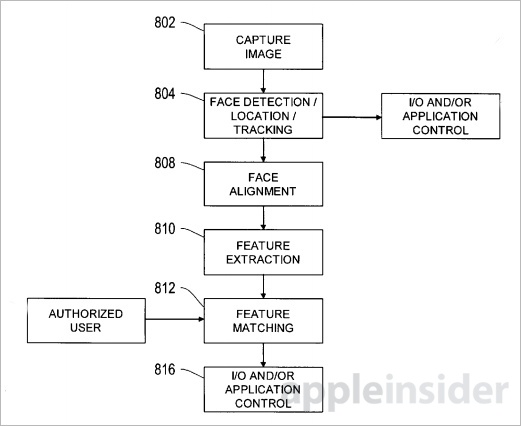 When implemented, the system scans an area where the user is supposed to be to identify the face, taking into consideration multiple identification factors. The next process is facial recognition, which works by comparing the face-feature vector data and determines whether or not the user is authorized to access the data.

Apple’s approach is interesting. As an example of the possible application of the face recognition feature, the company describes the situation of an incoming phone call: if the person looking at the iPhone’s screen is authorized, they will see the usual call UI If not, the screen remains off and the user will hear the ringtone (or vibration alert).

Just like with every other patent, it is unknown whether Apple will implement this feature in the near future or not. But adding facial recognition to iOS would be great, because it could boost the security level of the handset alongside Touch ID.

The patent credits Jeff Gonion and Duncan Robert Kerr, and the patent was first filed for in 2008.

Apple is expected to launch its first foldable iPad next year. According to TF International Securities' Apple analyst Ming-Chi Kuo, the device is said to feature a carbon fibre kickstand, ensuring a lightweight design. In a series of Tweets, Kuo claims that Apple may not launch a new iPad design in the next nine months...
Steve Vegvari
10 hours ago