Apple was granted patent rights for a technology allowing micron-wide antenna assets to be integrated into the housing of a portable device – including an iPhone – which could make them nearly invisible. 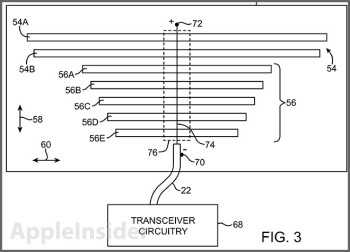 The pressure for an integrated antenna comes from the thinness of portable devices, so the internal space is becoming a limiting factor to device designers. Apple’s US Patent No. 8,373,610 for “microslot antennas for electronic devices” granted by the US Patent and Trademark Office today (Via AppleInsider) is the company’s answer to the trend.

Although the patent refers to implementations in a laptop, the technology described in the patent can be used in other portables like iPhones or iPads. The patent focuses on so-called “microslot antenna” technology or “dielectric-filled microslots that are formed in a ground plane element”, which as the description says it could be a device’s housing as long as it is conductive.

The patent also points out that the widths of the slots are usually less than their length, which means the microslot’s length could go up to millimeters or centimeters, while widths are limited to hundred of microns.