Apple was granted a patent on Thursday (via AppleInsider) in which the company imagines an electronic device that lacks any physical buttons, and is instead controlled by pressing, squeezing or otherwise deforming the device’s housing to input commands. 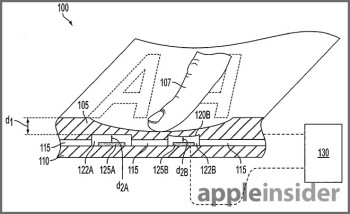 The US Patent No. 8,390,481 for “Sensing capacitance changes of a housing of an electronic device” describes an Apple-designed system in which the device’s housing becomes a mode of input. The invention can be applied to smartphones, laptops or other, yet unannounced products.

Although the original description reveals a device without any physical buttons, the patent details a wide variety of use scenarios in which touchscreen input could be inaccurate, like the presence of sweat or other contaminants on the common capacitive touchscreen that could compromise the accuracy of a touch display.

By implementing sensors into the housing, the device becomes capable to detect the pressure-form of input, which can take the form of squeezing, pressing, etc. And the sensors, if connected to a printed circuit board, can turn on indicators as a reply to the minimum amount of readable stress.

The patent also covers scenarios like carrying a handset in the pocket, when the device could be the subject of accidental stress input. For these cases, the capacitance across the surface for the housing is measured and applied to the time periods before and after a stress event takes place, determining whether the input was intentional or not.

The patent was first filed for in 2009, and names Aleksandar Pance, Nichlas Vincent King, Duncan Kerr and Brett Bilbrey as inventors.